The lived experiences of black men have oftentimes been misunderstood and largely ignored. That is, until videos of black men dying at the hands of police surfaced on what seemed to be a weekly basis via social media. Since then, we as a nation have been inundated with discussions of police brutality and community-police relations, but have yet to seriously consider the impact that these events and experiences have had on the psychological and emotional health of black men witnessing these tragic and traumatic events. For example, some black men watch the videos of other black men being killed and see themselves reflected in those images.

Although fruitful, these conversations have not holistically addressed current struggles faced by black men, and how these events impact their overall wellbeing. While discussions of homicide and police brutality persist, the Centers for Disease Control and Prevention (CDC) reports that suicide is the third leading cause of death among black men ages 15-19 and 19-24 (2013). This high prevalence of suicide demonstrates that black men are not only fighting a battle when they step outside into their communities, but they are also fighting a battle in their minds. Racism, high rates of incarceration, the need to conform to masculine norms, and the looming threat of police brutality are just a few stressors that black men must learn to navigate in order to survive (Hill-Wagner & Seminar, 2010; Bennett & Joe, 2015).

Despite being a taboo topic within many communities of color, the need for mental health care is real. In addition to understandable concerns about the conditions of the world they live in, anxiety, depression and suicide impact the daily lives of many black men, irrespective of age and economic background. Mental health challenges have never just been a matter of access to care, as even some of the wealthiest and most well known persons of color have experienced mental illness.

We would be remiss if we continued to ignore the serious issue of mental health within black communities, particularly among black men, whose incidence of suicide have exceeded that of black women (Joe & Kaplan, 2001; Griffin-Fennell & Williams, 2006).

Recently, the tragic case of Vester Flanagan, (a black male who captured and posted a video of himself shooting a news reporter, camera man, and local woman being interviewed, before killing himself) highlights the perils of possible untreated mental illness coupled with experiences of perceived racism in the workplace:

But he’s not the only one.

The following is a list of both notable and lesser-known black men who recently took their own lives. I began generating this list in the fall of 2014 and have since continued to monitor Internet sources that report these stories (i.e. social media sites, gossip columns, personal blogs, etc.):

While friends and family have used social media to mourn the lives of their loved ones, many other black men also utilized social media to directly or subtly express their intentions and feelings before committing suicide.

Seattle based YouTube sensation and rapper Freddy E (Fredrick E. Bhul) released a series of chilling tweets on the same day he died that pointed to alarming signs. One excerpt reads, “If there’s a God then He’s calling me back home. This barrel never felt so good next to my dome. It’s cold & I’d rather die than live alone.”

Merrick McKoy used Facebook to post a picture while holding his 19-month-old daughter, Mia, before writing “Don’t judge me had no choice.” He then killed Mia before killing himself. 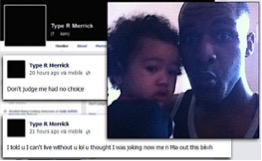 Renaissance High School student Billy Watts committed suicide by jumping into the Detroit River. Billy shared his last moments on Instagram where he posted a picture of his breakfast captioned with the phrase “My last meal.” He then uploaded a photo of his watch and wrote “Time to see if my watch is really waterproof, ” along with, “Thinking about cutting my hair for my funeral.”

In all of this I am left thinking that if social media played such a critical role in each of their deaths, could social media also have been influential in saving their lives? Had mental health information been both easily accessible and targeted towards black men, could these suicides have been prevented? All of the major social media sites have suicide prevention webpages with links to 24-hour hotlines. Facebook goes further to provide specific resources for members of the U.S. Military, along with persons who identify on the LGBT spectrum. However, there are no known culturally-tailored resources listed here for those who identify as racial or ethnic minorities. In future iterations of their suicide prevention program, it could be beneficial for Facebook to further explore the idea of providing culturally-sensitive resources to persons experiencing discrimination based on race or ethnicity, as we know that perceived racism has adverse mental health outcomes for racial/ethnic minorities (Williams et al., 2003).  We should reflect on how utilizing social media to promote mental wellness is a promising avenue in the fight to de-stigmatize mental illness among both black men and other underserved groups, an effort that could result in the saving of many lives.

*** Janelle R. Goodwill, MSW is a Doctoral Student in the Joint Doctoral Program in Social Work and Psychology at the University of Michigan. She is also the Lab Manager for the Gender and Health Research Lab.

View all posts by Administrator

7/17/20 – Congratulations to Dr. Watkins for being named a Diversity and Social Transformation Professor at the National Center for Institutional Diversity (NCID) at the University of Michigan!

7/10/20 – Congratulations to Dr. Mitchell for being awarded a R24 grant from the National Institutes of Health (NIH)!

10/26/18 – Congratulations to Dr. Watkins for being named a 2018 Distinguished Alumni at the College of Education and Human Development at Texas A&M University!

What we’re tweeting about:

Error: Twitter did not respond. Please wait a few minutes and refresh this page.

What we’re blogging about: